Eight national and Asian regional organizations based in the Philippines, Indonesia, Bangladesh, Pakistan, and Sri Lanka on Wednesday asked China to listen to the voices of the people in communities most directly affected by Belt and Road Initiative (BRI) projects. 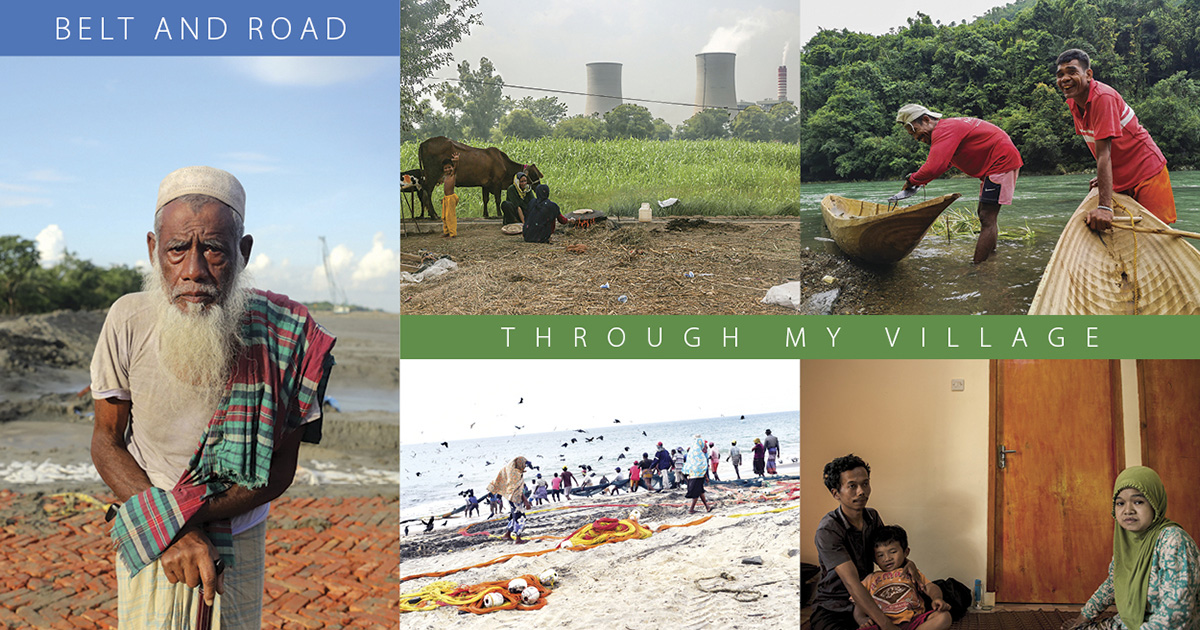 From the book, “Belt and Road through My Village” (Photos by Gigie Cruz in the Philippines, Iqbal Kusumadirezza in Indonesia, Fabeha Monir in Bangladesh, Aun Ali Jafri in Pakistan, and Chanaka Nalin in Sri Lanka)

MANILA, JAKARTA, DHAKA, ISLAMABAD, COLOMBO, Oct. 28, 2020 – Eight national and Asian regional organizations based in the Philippines, Indonesia, Bangladesh, Pakistan, and Sri Lanka on Wednesday asked China to listen to the voices of the people in communities most directly affected by Belt and Road Initiative (BRI) projects.

In a virtual press conference, leaders of the organizations said appropriate consultations with the local communities transformed by the BRI projects would maximize social benefits, minimize investment risks, and make the BRI truly “people-centered.”

A new book chronicling the effects of the BRI projects in the Philippines, Indonesia, Bangladesh, Pakistan and Sri Lanka turns the spotlight on the views of people affected by the BRI projects. The book was launched during the virtual press conference.

“Numerous books, studies, and research papers have been produced by governments, companies, economists, and investors about the BRI. The voices from the most important community, however, have not been heard,” Lidy Nacpil, coordinator of the Asian People’s Movement on Debt and Development (APMDD), said during the launch of “Belt and Road through My Village.”

The “Belt and Road through My Village,” co-produced by eight non-governmental organizations, is a collection of interviews with over 100 villagers who live on sites where BRI projects are being undertaken.

China’s total investments in countries where BRI projects are ongoing reached USD 117.31 billion, according to the 2019 China Outbound Direct Investment Statistical Report1 released recently by China’s Ministry of Commerce, the National Statistics Bureau, and the State Administration of Foreign Exchange.

As of end-2019, over 27,500 Chinese investors have established 44,000 direct investment enterprises in 188 countries and regions where BRI projects are located.

“The lives of billions of people in these 188 countries are being affected directly and indirectly, positively and negatively, and their lives are changed forever,” Nacpil said.

The book covered seven major BRI projects. They are the Kaliwa Dam in the Philippines, the Jakarta-Bandung High-Speed Rail in Indonesia, the Barisal 350 MW Coal Power Plant in Bangladesh, the Bahawalpur Solar Power Park and Sahiwal Coal-Fired Power Plant in Pakistan, the Colombo Port City and the Colombo Highways in Sri Lanka. The total population being affected by these seven projects alone stands at more than 15 million.

Based on the interviews, renewable energy and road construction are among the most welcomed projects. while lack of communication and transparency, especially with communities on the sites of the projects, unfair employment practices, and social and environmental impacts are among the most frequently raised complaints.

The following are snapshots of the stories and quotes in the book:

Water crisis is a serious challenge for the growing population in Metro Manila.

Mike Santos, a barangay official from Barangka Drive, Mandaluyong City, said they had to mobilize fire trucks to distribute water to residents. Santos said even with the emergency water distribution, “residents were easily angered despite our efforts because they were getting impatient over the situation.”

The Kaliwa Dam is part of the New Centennial Water Source projects to provide new water sources for Metro Manila and other nearby provinces. The project involves the construction of a 600 million liter-per-day (mld) capacity dam (73m high) and a conveyance tunnel that has a capacity of 2,400 mld (27.70km long, 4m diameter, around 200m deep).

Around 300 indigenous people will be displaced from their ancestral lands when the construction begins. Once completed, the project will inundate a large part of Barangay Daraitan in Rizal and several areas, including Barangay Pagsangahan and Barangay Magsaysay in Quezon Province. Residents of indigenous communities living along the Kaliwa River said they were not fully informed nor consulted about the project. “We remain clueless about the proposed dam,” Maria Clara Dullas, 39, a resident of Daraitan, in Rizal province near Metro Manila, said. “The Metropolitan Waterworks and Sewerage Systems has not reached out to residents of Daraitan to explain its possible impacts on the community,” she said.

Talking about the Jakarta-Bandung High-Speed Railway, 23-year-old student Nissa Nurmauluddiana said: "I think this is positive because there will be many transportation options to Jakarta, especially now, Bandung people who work in Jakarta or Jakarta people who are on business to Bandung always run out of train tickets.”

The project was envisioned to be completed in 2019, but was delayed due to problems related to land acquisition and compensation to villagers and local workers. The total investment is estimated to be USD $5.5 billion. About 124,000 villagers have been affected by the construction of the railway.

According to KRuHA, which works closely with the local communities, some people protesting the land acquisition have been beaten and arrested. They are gravely concerned about reports of incidents of human rights abuses.

Silvi Febrianti, a college student from Gempolsari village in Bandung said: “until now, I have not heard any news from the government about our land

compensation money. It’s not clear enough when we will get it, and how much we will receive. I want to move as soon as possible.”

Maliha Hossain, 38, a business woman, talked about the importance of electricity to her online business and to Dhaka. “In Dhaka city, there is an unlimited number of food courts and recreational activities, if electricity stops working, everything stops. This is a matter of great satisfaction. But for the last three years or more, we have been getting an uninterrupted electricity supply.”

However, she also voiced her worries about possible air pollution from the coal-fired power plant project.

The Barisal coal-fired power plant project is expected to begin operations in 2022. The entire project will require 300 acres of land and the government is expected to buy power from this plant for a period of 25 years, according to the agreement. The project site is surrounded by land reserved for wildlife and fish sanctuaries. Villagers said they were forced to evacuate the land to give way for the project.

Abdul Malek Mosulli, 96, from Taltoli, is one of the hundreds of villagers who lost his house. “Local villagers protested, but police brought charges against innocent young men,” he said.

Now the village is visibly divided into two parts: the high land acquired for the power plant and low land where the villagers relocated. With the recent floods, the relocation site has been underwater for months. There is no drinking water and no fish to catch. The residents are jobless. A number of people have become laborers at the plant site.

“Our lands have gone from zero to hero since the Quad-i-Azam Solar Power Park project was initiated in the area,” Muhammad Iqbal, 62, a counselor in Chak 6-BC, one of the villages close to the solar power park in Bahawalpur, said.

The Quaid-i-Azam Solar is a 100 MW solar plant spanning 200 hectares of desert land, and Sahiwal Coal-Fired Power Plant, encompassing 690 hectares of fertile land, has an installed capacity of 1320 megawatts.

In a different village, Noman Bhatti, 40, was not happy with the Sahiwal Coal-fired Power Plant. “I’m still at a loss to understand why the most fertile land in the Punjab province has been selected to commission such an anti-agriculture project,” Bhatti said. “We, the affected community, had approached the court of law to resist installation of the plant here. Some officials managed to blackmail most of the plaintiffs in the name of National Interest.”

In 2019, China and Sri Lanka signed an agreement to further fund and build the Central Expressway Project (CEP).

Tharushika Wickramasinghe, 25, talked about how she had changed her mind about highways near her house after experiencing the new conveniences: “I would like to see more highways coming up in the country and want the Chinese to help the Sri Lankan government to build more expressways.”

The Colombo Port City was proposed in early 2012 by the China Harbour Engineering Corporation as the site for constructing the Colombo International Financial City. The project is expected to be completed by 2041 and will be on a 99-year lease.

Aruna Roshantha Fernando, a 49-year old fisherman, raised questions about it: “I don’t think Sri Lanka needs such a big city port in Colombo. Only the rich people will benefit from this project. What happens to poor people like us who earn a living by the resources of the sea?”

All the testimonials are presented in the book in the native languages of the villagers, and have been translated into English and Chinese for international and Chinese audiences.

At the 75th Session of the United Nations General Assembly in September 2020, President Xi Jinping called on all major countries to act with leadership. “They should provide more global public goods, take up their due responsibilities and live up to people's expectations.2” This was a continuation of his call for China and host countries “to act on the principles of high standard, people-centered and sustainable development”3 at the 2nd Belt and Road Forum in Beijing in April 2019.

“In order to achieve true ‘people-centered’ vision for the BRI, China must work with host country governments and be more proactive in reaching out to the communities to be affected,” Wang concluded. “Only when these voices are heard, will social, environmental, political and financial risks be minimized, and will real benefits and welfare improvements be shared by all involved.”