Groups raise the alarm on a Climate Emergency, call for effective action from Philippine government

“Climate change is escalating rapidly and will continue to do so unless stopped. We are raising the alarm because we only have a very short window of time to do what must be done.” 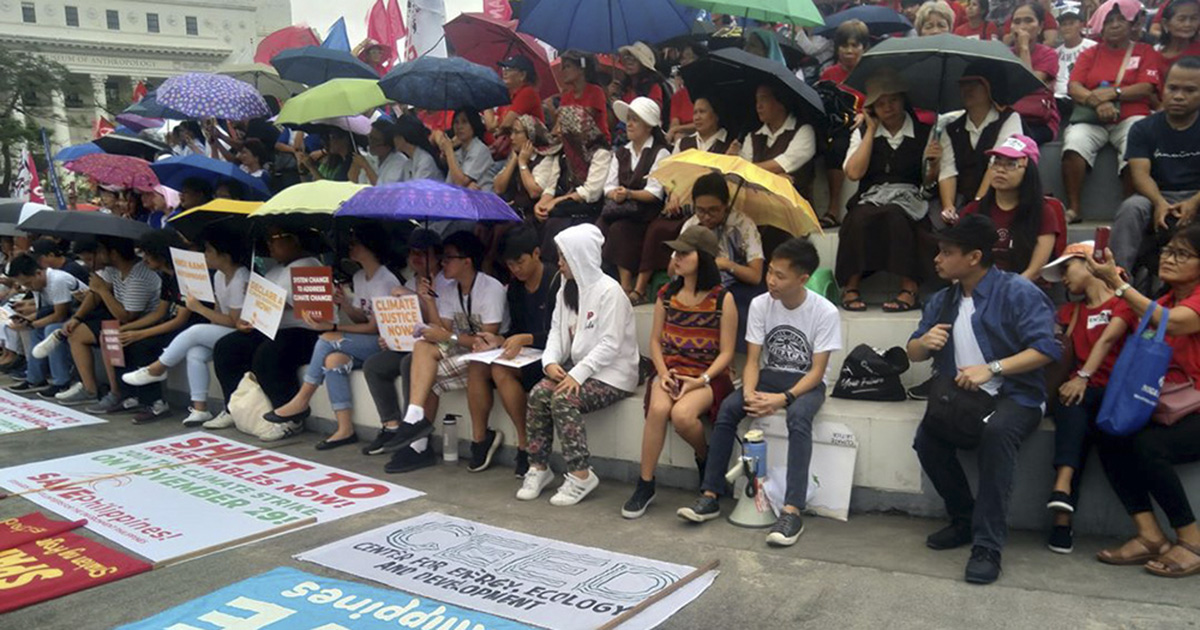 Rizal Park, MANILA (November 29) – Raising the alarm on a Climate Emergency, various groups under the banner of the Global Climate Strike-Philippines called on the Philippine government and governments around the world to act decisively to address global warming in a rally at the Lapu Lapu Monument.

Lidy Nacpil, coordinator of the Asia Peoples' Movement on Debt and Development (APMDD) said “climate change is escalating rapidly and will continue to do so unless stopped. We are raising the alarm because we only have a very short window of time to do what must be done so we do not lose the chance to prevent catastrophic climate change.”

“It is still possible to hold off runaway global warming which will threaten life on Earth as we know it,” she added. “This requires urgent, large-scale and swift actions to transform and decarbonize energy, food, transport and production systems. We need system change, not climate change.”

But Ian Rivera of the Philippine Movement for Climate Justice (PMCJ) lamented that “the Philippines, although in the top three most vulnerable countries in the world, is lagging far behind in building resilience and enabling our people to deal with climate change impacts. Worse, it still insists on expanding the use of coal and other fossil fuels.”

Atty. Aaron Pedrosa, secretary-general of Sanlakas, further observed that most governments and corporations are failing to realize pledges made in the Paris Agreement. “This business-as-usual attitude will steer us to destruction,” he said.

He noted that only a few local governments in the country are steering away from coal. “The Energy Department is even justifying its continued use.”

Various groups are active in the Climate Strike events. Fr. Angel Cortez of the Ecological Justice Interfaith Movement called on faith communities to mobilize so that they can contribute to confronting the challenge of the climate emergency. He hailed the second encyclical of Pope Francis, Laudato si': On Care for Our Common Home, which appeals to all people of the world to take “swift and unified global action.”

The women’s organization, Oriang Women’s Movement, is also active in the Climate Strikes. “This climate emergency affects everyone but especially women,” said Flora Santos, Oriang president. “Families face hardships and even displacement during disasters. The mothers and other women are put at risk but still have to respond as best they can to keep their families fed and safe,” she said. “We are here to fight for our families and our children’s future and we call on other women to do the same.”

Zeena Bello Manglinong of the Freedom from Debt Coalition said “people need and deserve a decarbonized, equitable, just and sustainable economy, a caring economy for our people and our planet. The same economic system that breeds poverty and inequality has caused global warming and climate change.”

With the United Nations Climate Change Conference in Madrid meeting on December 2-13, millions of people around the world joined the November 29 climate strike to demand that governments act on pledges to stem the earth’s temperature at the safest level still possible – below 1.5 to 2.0 degrees Celsius above pre-industrial levels.

The event here was organized in partnership with the City Government of Manila and the National Parks Development Committee.

This article is also published on APMDD’s FB page.