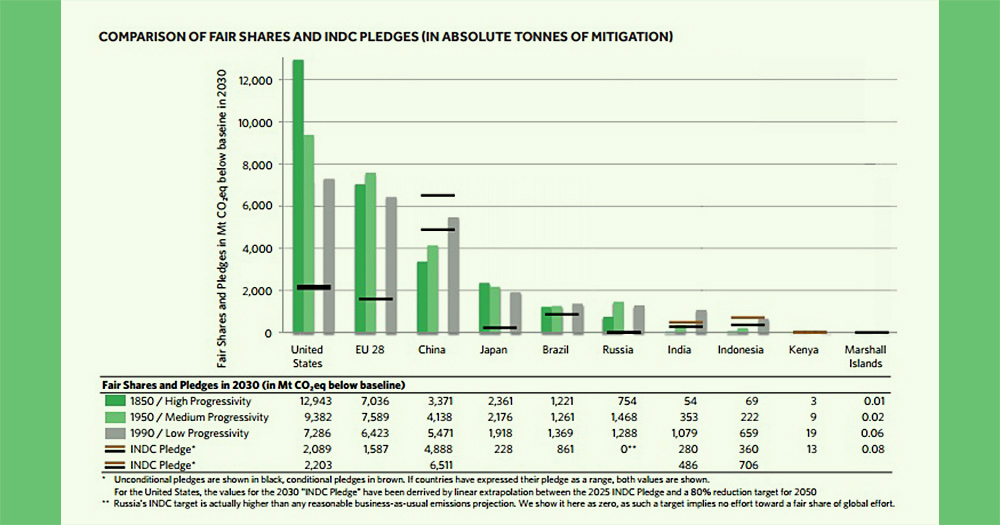 What is the review about?

It is also supported by numerous social movements, networks, and other civil society groups in the international, regional, and national levels; a full list is included in the full report.

When was this review done?

The review started in June 2015. The summary report was released last October 19, while the full report will be released on November 4.

INDCs refer to Intended Nationally Determined Contributions, the official name of the UNFCCC for the climate targets and actions which a majority of countries submitted on or before October 1, the deadline set by the UNFCCC. They are commonly referred to as "national climate targets/actions" or "pledges".

They are referred to as the initial offers of countries in terms of responding to climate change, and as the building blocks of the new global climate agreement, which is set to be finalized at the upcoming Paris climate conference. The current INDCs will be implemented from 2020 to 2025 or 2030.

How many INDCs were analyzed in the review?

This assessment includes INDCs covering 145 countries and some 80 percent of current global emissions.

The review covers the same set of INDCs compiled and synthesized by the UNFCCC for its own report published on October 30, with the sole exception of Andorra (because it is excluded from most of the data sets upon which our analysis draws for consistent national information). Note that the single INDC of the European Union represents 28 countries.

What makes this review different from other reviews on the INDCs?

This review is different because it uses not only a science-based assessment of the necessary global level of climate action, but also uses widely accepted notions of equity to present fair shares of the necessary effort for each country. The equity and fair shares standards are anchored on the UNFCCC's core principles of "common but differentiated responsibilities and respective capabilities" and the "right to sustainable development". The equity and fair shares standards used in this review take into account a range of interpretations of these principles.

We believe that the principles of equity and fair shares can be defined and quantified robustly, rigorously, transparently and scientifically, while accounting for differences of perspectives.

What are fair shares?

All countries should undertake their fair share of the global effort to tackle climate change. Each country's fair share is based on its historical responsibility and capacity.

Some countries have already emitted a great deal for a long time, contributing to warming that is happening already, and they thrive from the infrastructure and institutions they have been able to set up because of this. Some countries have much higher capacity to act than others, due to their higher income and wealth, level of development and access to technologies.

Why is this review important?

If the INDCs are not reviewed using a global carbon budget based on the science and widely held notions of equity, we will not be able to determine if each country committed its fair share of climate action. Equity and fairness are vital to unlocking cooperation, because – as the IPCC concluded in its most recent report – agreements that are seen to be fair are more likely to actually work.

We will also not know if they are enough collectively to stave off dangerous global warming. The review sets a basis to demand higher ambition from each countries in Paris and beyond.

What are the key findings of the review?

The review shows that the INDC commitments will likely lead the world to a devastating 3°C or more warming above pre-industrial levels. The current INDCs amount to barely half of the emissions cuts required by 2030.

Moreover, the INDCs submitted by all major developed countries fall well short of their fair shares. From the list of countries highlighted in the report, Russia's INDC represents zero contribution towards committing its fair share. Japan's represents about a tenth, the United States' about a fifth, and the European Union's just over a fifth of its fair share.

Most developed countries have fair shares that are already too large to fulfill exclusively within their borders, which is why there is a need for them to provide additional resources for developing countries to do more than their fair share, particularly through finance, technology, and capacity-building. However, there remains a striking lack of clear financial commitments from developed countries.

On the other hand, the majority of developing countries' mitigation pledges exceed or broadly meet their fair share, including Kenya, the Marshall Islands, China, Indonesia, and India. Brazil's INDC represents slightly more than two thirds of its fair share.

Can developing countries with the largest rising emissions, such as China and Indonesia, now sit back because they have met their fair share?

While the report clearly shows that the onus is on developed countries to commit more emissions cuts and financing, by no means does it give a free pass to developing countries. Our primary call is for each country – developing and developed – to do all it can in terms of climate action, working even to surpass its fair share.

Does the recommendation for financial and technical transfers from rich to poor countries constitute an offset?

A carbon offset is a mechanism to reduce in emissions of carbon dioxide or greenhouse gas in poorer countries in order for richer countries not to have to undertake domestic reductions.

The CSO review recommendation is that rich countries have to do the maximum they can domestically and then in addition they have to provide financial and technological support for poorer countries to reduce emissions even beyond their fair shares. Both these together are needed to meet the fair share of developed country action.

What must be done to close the emissions gap?

The Paris agreement must ensure that domestic commitments and global targets alike are set in accordance with science and equity. It must also include a strong mechanism to increase the ambition of INDCs before their implementation in 2020, and every five years thereafter.

Finally, countries must scale up action for sustainable energy transformation.