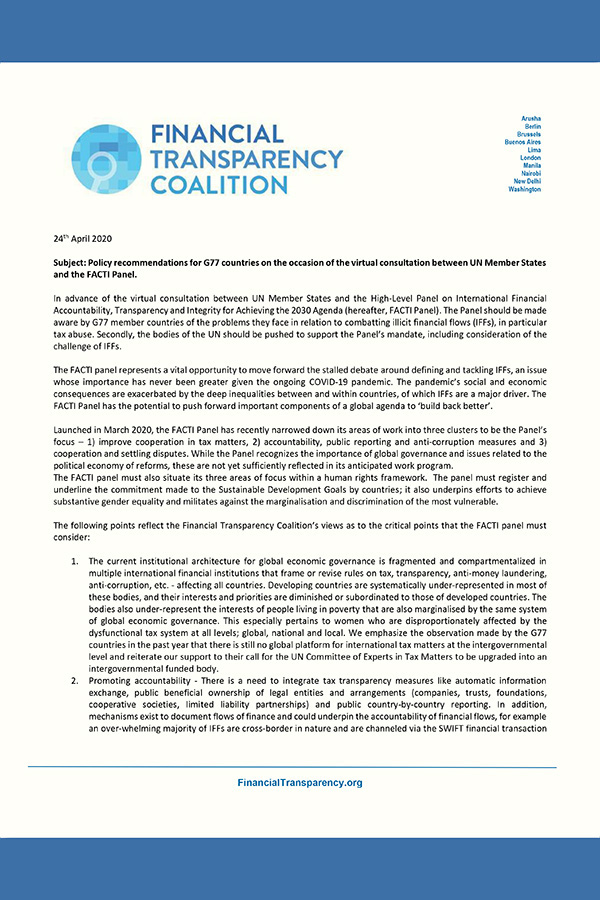 In advance of the virtual consultation between UN Member States and the High-Level Panel on International Financial Accountability, Transparency and Integrity for Achieving the 2030 Agenda (hereafter, FACTI Panel).

The Panel should be made aware by G77 member countries of the problems they face in relation to combatting illicit financial flows (IFFs), in particular tax abuse. Secondly, the bodies of the UN should be pushed to support the Panel’s mandate, including consideration of the challenge of IFFs.

The FACTI panel represents a vital opportunity to move forward the stalled debate around defining and tackling IFFs, an issue whose importance has never been greater given the ongoing COVID-19 pandemic. The pandemic’s social and economic consequences are exacerbated by the deep inequalities between and within countries, of which IFFs are a major driver. The FACTI Panel has the potential to push forward important components of a global agenda to ‘build back better’.

View in full screen
Refresh page if preview is blank

Launched in March 2020, the FACTI Panel has recently narrowed down its areas of work into three clusters to be the Panel’s focus: 1) improve cooperation in tax matters, 2) accountability, public reporting and anti-corruption measures and 3) cooperation and settling disputes. While the Panel recognizes the importance of global governance and issues related to the political economy of reforms, these are not yet sufficiently reflected in its anticipated work program.

The FACTI panel must also situate its three areas of focus within a human rights framework. The panel must register and underline the commitment made to the Sustainable Development Goals by countries; it also underpins efforts to achieve substantive gender equality and militates against the marginalisation and discrimination of the most vulnerable.

The following points reflect the Financial Transparency Coalition’s views as to the critical points that the FACTI panel must consider:

We urge you to speak out in support of these proposals made in the letter and extend your support towards the work of the FACTI panel.